All About Hours of Service | A Guide for New Trucking Companies
×

All About Hours of Service 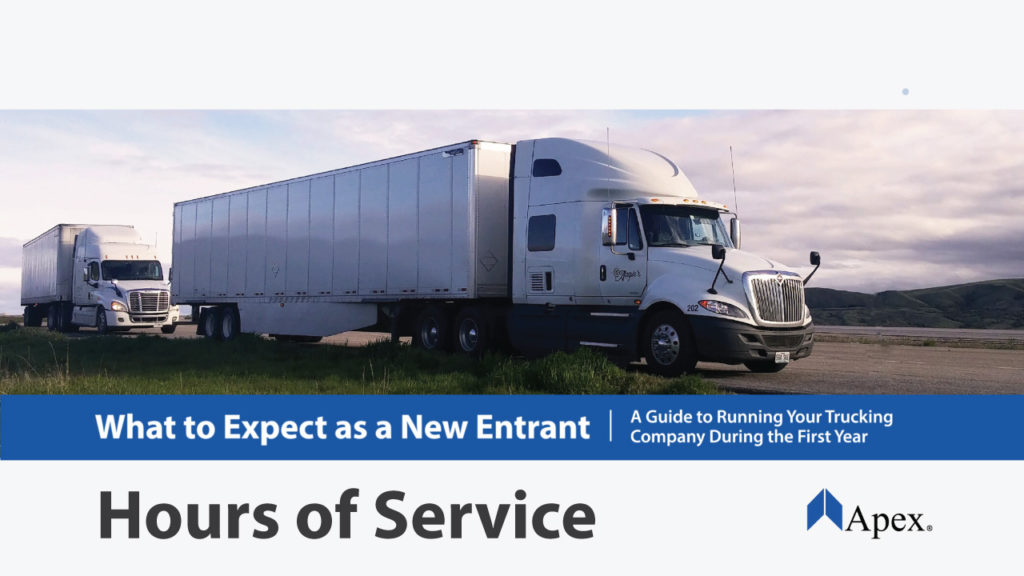 What You Need to Know About Hours of Service

We’ve put together a series of short videos to explain some of the regulations and important topics to know the year after you start your trucking company, including hours of service regulations. You can also download the free white paper below.

This video series, What to Expect as a New Entrant, A Guide to Running Your Trucking Company during the First Year has been developed by Apex Capital to help you understand the policies and procedures that you must have in place in order to pass your safety audit and receive your permanent operating authority.

Today we are talking to Reghan Orman about Hours of Service. Reghan is Associate General Counsel at Apex Capital and she also leads the Apex Startup Program. A program that’s designed to help those interested in starting a trucking company get their operating authority.

What are the Hours of Service rules?

Hours of Service rules are driving and driver time limits that the FMCSA, the Federal Motor Carrier Safety Administration, has put into effect to ensure safety as well as to keep fatigue drivers off of the nation’s roadways.

What are some of the main rules?

I’ll walk through four of the main hours of service rules.

The first one is the 11 hour driving limit and that means that a driver can drive up to 11 hours during any consecutive 14-hour period.

The second rule that kind of goes along with that first one is the 14 hour limit, and that means that for every 14 hour consecutive period that a driver has in which they can drive up to 11 hours, they need to take a 10 hour consecutive break before they drive again.

Third there’s the rest break rule and that means that every eight consecutive hours of Drivetime the driver has to take at least one 30-minute break either off-duty or in the sleeper berth.

And the fourth rule is that it’s the 60 or 70 hour limit and that means that a driver cannot drive after 60 hours in a 7 day period or 70 hours in an 8 day period unless they restart their clock and that restart is done with 34 or more consecutive hours off duty.

Now the important thing to remember out this one is there used to be a rule limiting that restart to one per week and requiring that it have two periods in it from 1:00 a.m. to 5:00 a.m but that was suspended in 2014 and is still pending the FMCSA completing some studies to make sure that it had the effect they were hoping for. Now keep in mind there are lots of nuances and exceptions to these rules but those are your four main ones.

How can I maintain Hours of Service compliance?

Every motor carrier can help maintain their hours of service compliance by keeping a logbook. Now that can be in either physical form or electronic a lot of your bigger carriers and even some smaller ones have already switched over to electronic logbooks but it would be wise to switch to an electronic logging device or E-logs as soon as you’re able to because by December 16th of 2017 all motor carriers are going to be required to be using a ELD’s except those with a model year older than 2000.

How long should I keep Hours of Service documentation?

The record-keeping requirements for hours of service documents varies regarding who you are. So drivers have to keep with them a copy of the previous seven days worth of logbooks that they have in case of inspections and they have to submit those logs to their motor carrier within 13 days of completion. The motor carrier then is required to retain the logbooks for at least six months and they also have to keep supporting documents for those logbooks and supporting documents is anything that could corroborate a logbook which includes things like expense receipts for fuel or personal items, dispatch records, or even bills of lading.

What happens if I don’t keep Hours of Service log books?

If you’re not keeping your hours of service log books you’re violating an FMCSA regulation and anytime that your company’s doing that you’re liable for civil penalties and sometimes even criminal penalties so make sure that you’re keeping your logbooks otherwise ultimately your authority could be revoked.

See the Rest of our Series:

What is a New Entrant?