David Baker: The Humanity of a Racing Champ | Apex Capital
×

David Baker: The Humanity of a Racing Champ 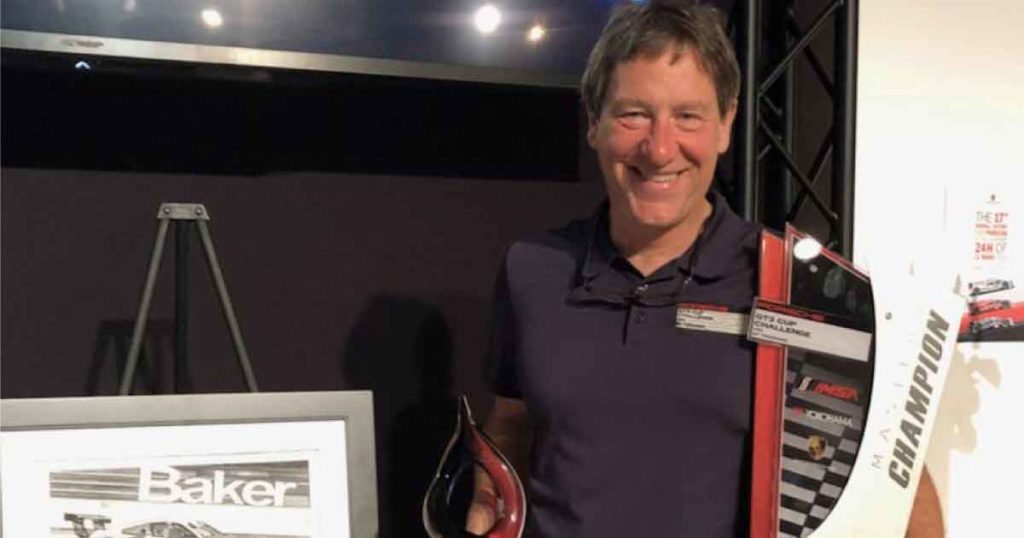 For David Baker, racing is like life. It’s a place for courtesy, camaraderie, and competition. How you conduct yourself off the tracks is just as important as how you perform at 180 miles-per-hour.

“It’s how you relate to the mechanics that work on cars, teammates, your peers, and your competitors,” says the President of Apex Capital Corp and the proud owner of the 2017 Porsche 911 GT3 Cup that’s zipped through 16 races on 8 different tracks.

“I like talking to the drivers, especially the young ones,” he says “They are 16, 17 and here I am at 60 years of age. We have to co-exist on the race track. It’s better to give someone racing room, especially during the edgy, close-to-each-other-in-corners parts. At the same time, you are a racer and you don’t want to make it easy for them.”

That philosophy continues to fuel Baker, empowering him to succeed in the racing circuit while making a difference for trucking companies who trust Apex for their freight factoring needs. Earlier this month, during an awards ceremony in Braselton, Georgia, Baker was honored with three racing trophies. Two of them are cumulative for the entire GT3 Cup Challenge USA by Yokohama series season, which is part of the 2017 International Motor Sports Association (IMSA). He was named the Platinum Masters Champion 2017, and he received the Hard Charger Award, which is given to the racer who advances the most positions in a race. He passed more cars this season than any other driver in the Platinum class.

But then there’s the Spirit of Speed award. That one was unexpected, Baker admits. It isn’t about points, passing, or even placing. It’s about character off the pavement. It is voted on by the IMSA staff and given to “an individual or entity that best represents the true racing spirit of Porsche.”

Baker was stunned. He had no idea about that one. All he knew was that he had the championship points for the master’s trophy. The Spirit of Speed award is special.

“This is the one you can’t buy,” he says. “It means a lot because it comes from your peers. That is the most coveted.”

The Spirit of Apex

The Spirit of Speed award speaks to Baker’s philosophy, his personality, and his humanity. It also sheds light on his business acumen. Baker believes passionately that in business you must do the right thing, and Apex has long been molded by those potent words. For 22 years, Apex has served small to medium-sized trucking companies with friendly, client-focused freight factoring. Apex clients are treated with respect, award-winning customer service, and given a variety of industry exclusive service tools to make their business thrive.

Racing, like life and like Apex, is all about “people and chemistry,” Baker says. “They all balance each other out and you do the best job that you can.”

When asked about the similarities of racing and running Apex, Baker tells a story that originates behind the wheel at top speed.

“All of us have a driver coach and after every session we download hundreds of data in a graphic, from a camera in the car,” he says. “Everything you do is filmed. You pull the data and the film out and you are evaluated after the race. You get your report card. You get feedback at Apex, too – a financial statement, leadership, and the power of development outside our comfort zone. If you are not outside your comfort zone, you are not learning. Teamwork and communication, relationships with others, the other guys that wear helmets…we all have different personalities. It’s the same thing at Apex.”

So why racing? Why has David Baker thrived on such a high energy, adrenaline-pumping sport for the past dozen years?

“I enjoy competition, but this particular breed of cats that do this are some very special people,” he says. “They are blessed, talented, passionate, fun. They have to get more out of this than a paycheck. It’s not about the money, it’s about the love of the sport.”